This was back in the day. Back when the world was black and white. Back when my mom could do little right and my dad could do no wrong. So, you know, not all that long ago, really. And, it was an exciting time, once I got over myself. 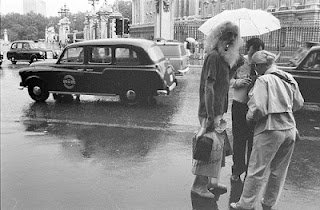 It was my first trans-continental trip, and my first real international flight. Africa was as foreign and mysterious as a journey could get, and it started with a three-day layover in London. Oh the pageantry, the history, the shopping!

As I mentioned, this was back in the day. Back when you dressed up to take a plane. When tickets came in multi-parts with red carbon. Back when stewardesses were stewardesses and brought around free drinks on little shiny trays.

My parents were not drinkers. They had been adamant about this fact, and could quote chapter & verse against the dangers of alcohol. They sometimes had a wee glass of wine here or there, but for some reason I forgot that. So I was horrified and deeply offended when I noticed mid-flight my mom’s tell-tale red nose and endless giggle, and the cheap plastic wine glass in dad’s hand.

I don’t remember if my indignation flashed immediately or built in a slow burn over the cold Atlantic, but by the time we landed at Heathrow, I couldn’t even look at them.

This was back in the day. Back when I had the mad skills of a moody teenager in ignoring, glaring, huffing and walking either three steps ahead or three steps behind. Somehow, I managed to spend our first 24 hours in London not laughing at their jokes, acknowledging their wonder, or speaking directly to them. Maybe they attributed it to jet lag. Or perpetual moodiness. Or, maybe, having raised two other teen girls, they didn’t care to wonder much at all and were glad of the silence.
__________________
My apologies - I am 17 words over tonight. Apparently tonight is not a night for killing your darlings.

This week you had the choice of three Olympic-inspired prompts. In case you missed them, here they are:

100 words on a conflict, competition, or game.

300 words on a topic of your choice. The only catch? Your setting must be London, Beijing, or Rio de Janeiro.

Partner up with another Write on Edge writer. You each have 450 words to write about a conflict between two characters; each writer should represent a single character’s point of view.