Me Before You: a book club review

There was more to Jojo Moyes' novel Me Before You than I anticipated, but not quite as much to it as their could have been. I know that in general we are discouraged from judging a book by its cover, but that's like saying not to judge people for how they present themselves - a nice idea, but a little naive. When a book looks like the prototypical 'chick lit,' I don't have high expectations. 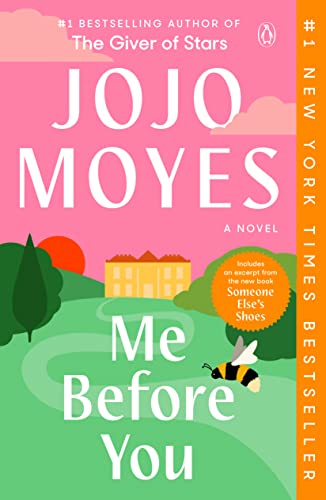 The characters in Me Before You, particularly the lead character Louisa, are complex and sympathetic, except when they're not meant to be. Louisa's parents are well drawn, perfectly flawed, struggling, inadvertently cruel and loving, unfair without malice, and limited by their own concerns. Her sister - the favoured daughter despite being completely self-absorbed and having quit college due to an unplanned pregnancy - is quintessentially sisterly. Loving when she's not being a bitch, and there when the chips are down.

Though the plot of Me Before You sometimes verges on the maudlin and overwrought, it kept my attention and moved at a compelling pace. It didn't rush the reader or the characters, but their development over time was believable and rewarding. I sometimes thought the author was being manipulative, but that's because my reading was flawed by a misleading spoiler. I wish I could read it again for the first time and see if I still felt that way.

Me Before You is set in a small English town, and as our book club hostess said "is Pride and Prejudice with a gang rape." In fact, though, the gang rape is one of the most poorly managed aspects of the plot. The main story is between charming, lackluster 26-year old Louisa who is perfectly happy with her job at a diner and living with her parents until the diner closes and she take a position as a 'carer.' Her client, Will, is the epitome of the entitled, public school attending, man of action, upper middle class Englishman. He's also bitter and suicidal since being hit by a car left him a quadriplegic.

Despite all it has going for it, Me Before You fails to deliver. It broaches gang rape, teen pregnancy, the rights of the disabled and assisted suicide, and yet my over-all impression was of whip cream: it looks great and tastes good, but really doesn't satisfy. The fault lies mainly in the low reading level - it's a rare writer who can address complex issues with simple language; Moyes is not one of those writers. I do recommend the book; it was thought-provoking in a 'table topics' kind of way - it raised the point, but did little to really inform.
What a brilliant woman our Teacher Lady is - her family was in the middle of moving this month but she didn't want to miss her turn hosting, so she booked a suite in a lovely downtown hotel and hosted us there.

Downtown drinks after were an option. A dip in the pool could have been an option (if it hadn't been closed for maintenance). More ladies showed up than have attended in a year (in fact, everyone except Little E was there, her excuse being 39 weeks pregnant), and the food was outstanding.  It was, in fact, the perfect book club night.

I wish I could have stayed over with Teacher Lady. It was a great reminder that we live in a beautiful city that people visit from all over the world.

Email ThisBlogThis!Share to TwitterShare to FacebookShare to Pinterest
Labels: Reading