sometimes memory lane is haunted (or, why was i such a scaredy cat?)

I spent several happy hours this week completing a charming puzzle Shiney sent me. Sending each other puzzles has become our 'thing' in the last few years, although the backstory is best told offline and in forgiving company. The spark wasn't our most politically correct moment, but now ... sending puzzles is our thing.

I don't actually remember Shiney and I doing puzzles together when we were little neighbour girls. I had a Pink Panther puzzle that I loved and did over and over again (oh, the adult luxury of the one-off puzzle!), and I imagine we must have done it together at some point, but I don't have any specific memory of it.

No,  40 years ago reading horse stories and then Hardy Boy mysteries on our long school bus ride was more our thing, along with sneaking around in the forest that surrounded our homes and traipsing after her big brother and his friend. I may, in fact, have squealed this summer to find a jigsaw puzzle comprised of Hardy Boy mysteries covers - it was the perfect golden thread between then and now. Of course I had to send it to Shiney, and she, in return, sent me this puzzle of children's book covers. 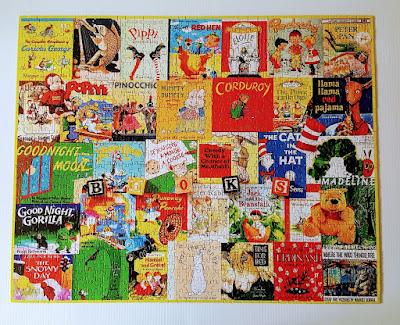 As I was piecing this puzzle this week I was at first charmed to see all my favourite friends, particularly beloved Winnie-the-Pooh. Free-spirited Pippi Longstocking is there as well, reminding me of the year I dressed as her for Halloween and the way those fake, red, sticking-out braids built on a wire coat hanger dug into my head. Sweet, gentle Ferdinand smelling the flowers in his field no matter how much people wanted him to be ferocious always seemed a friend, and now reminds me of a certain son of mine. And there's Madeline - the littlest of all - in her confusing and rhyming French context, and always naughty Peter Rabbit who fed my love of lagomorphs. There are several books here I've never heard of, and I few I'm familiar with but have no emotional connection to, but I was surprised to see how many I remember with a bit of a cringe.

It's no secret that I was prone to nightmares as a child. In fact, I still am. The only reason I started watching Game of Thrones on TV in 2011 was that I had a giant squishy protector to keep me safe in the dark. Otherwise, I don't watch fantasy, horror, or thriller TV or movies. I've mostly equated it to having too vivid an imagination combined with a belief in both a just and loving God and evil supernatural powers.

What's odd, though, as I remember being super creeped out by something as ludicrous as the Run-Away Pancake (mind you, don't come between me and brunch) or finding something sinister about the Cat in the Hat, is trying to figure out why I would have been such an easily frightened child. My parents were both present and loving. I shared a room with generally tolerant Freckles, and while she wouldn't have consoled me much of the time at least I wasn't alone. We had a secure home, lots of friends, and loving connections with our extended family. Parental Guidance was an actual approach to parenting, not just a movie rating. I had a fairly simple and genuinely happy childhood.

And yet I had recurrent terrors in the night that sometimes left me unable to go to school the next day, and I dreaded the sounds of cars on the gravel road in our housing compound because I knew they would cast lights upon the wall that I knew weren't ghosts yet would inevitably interpret as such. Things that were supposed to be a treat - like watching the Wizard of Oz in our school library - sent me crying from the room and hiding under a desk until my mom could come to town to pick me up.

Aside from the nightmares, which I mostly know how to avoid, I don't consider myself a fearful adult. I do have a bat phobia, but since I don't live in bat-infested territory I rarely have to confront that. I genuinely love adventure, seeing new places, and trying new things. And I like people - I am equally comfortable at a cocktail party with the Premier or talking to a room full of people experiencing homelessness. I have no problem wandering in the city or in nature on my own, and Jamaica taught me that I like jumping from (relative) heights into water. There's a kind of fear/anticipation that I really enjoy. So why did I spend so much of my childhood quivering?

Honestly, maybe I didn't. Maybe it only seems like that because I'm focused on those memories right now, instead of on 4x4ing in the foothills of the Rockies, and learning to shoot a gun, and tubing in frigid river waters, and exploring our wild "neighbourhood." And maybe fear of physical things is less real for me than psychological fear. I don't have any deep insights, it was just something that occupied my thoughts this quiet week as I meditated on the puzzle shapes.

Email ThisBlogThis!Share to TwitterShare to FacebookShare to Pinterest
Labels: Quiet