Long ago and far away, I read Don Miguel Ruiz' The Four Agreements on a flight from Prince George to Chicago. Never has a flight gone faster, or a small book seemed written just for me. As I pondered New Years' resolutions the last couple days - not something I've ever really felt strongly about - all that came to me was 'do better.' Over and over - do better. Be better. Stop giving up so easily. Stop being such a whiner. Work harder. Stop blaming other people for your life. Stop hiding out. Mind your money. Eat better. Exercise more. It felt more like a relentless whipping than an inspiring resolution.

And then late last night, as I was checking into Facebook just to wish all & sundry a Happy 2012, UberCoach shared this - a condensation of the four agreements, and I realised I didn't need a new resolution - I just needed to be reminded that I've already agreed to these. In fact, for many years and through various jobs, I had this posted above my desk but had somehow lost the thread:

1. Be Impeccable With Your Word
Speak with integrity. Say only what you mean. Avoid using the word to speak against yourself or to gossip about others. Use the power of your word in the direction of truth and love.

2. Don't Take Anything Personally
Nothing others do is because of you. What others say and do is a projection of their own reality, their own dream. When you are immune to the opinions and actions of others, you won't be the victim of needless suffering.

3. Don't Make Assumptions
Find the courage to ask questions and to express what you really want. Communicate with others as clearly as you can to avoid misunderstandings, sadness and drama. With just this one agreement, you can completely transform your life.

4. Always Do Your Best
Your best is going to change from moment to moment; it will be different when you are healthy as opposed to sick. Under any circumstance, simply do your best, and you will avoid self-judgment, self-abuse and regret. 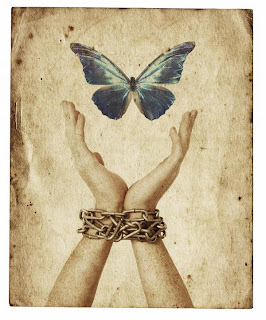 There are things here that I think I come close to - I'm pretty careful to say what I mean - but more often say nothing at all. It's taken some practice over the past few years, but I've learned that honesty is easy. But, I still love to gossip - and I'm at least as hard on myself with what I say as I am with other people.

That's not the agreement that most worries me though ... I hesitate to even say I'll agree not to take things personally - it feels like cutting off a piece of who I am.

Some days I take absolutely EVERYTHING personally - what's said. What isn't said. Actions. Looks. The absence of action and looks. It's crazy making, for more people than just me. And, behind that is a series of wrong assumptions - they go hand in hand. Communicating clearly and fully would, I think, as Ruiz promises, transform my life.

I have big hopes for this year. It's a bit disappointing to sit at the edge of a new year and feel like I've devolved from where I was at this time last year. But I suppose maybe as part of those agreements I could ease up on myself and have a little fun too. Maybe doing my best doesn't have to mean wearing myself out. Maybe my best is communicating, relaxing, enjoying, being present, letting go and loosening up ... there's a year I can look forward to.