There's been much hullabaloo on the interwebs of late about the word 'bossy' and how detrimental it is for girls to be labelled with that word while they are growing up. No less a big boss woman than Facebook's COO Sheryl Sandberg (she who over-popularized the insta-cliché 'lean in') has been behind a substantial campaign to ban the word, claiming that girls who are called bossy are discouraged from taking on leadership roles. Or maybe her concern is that that girls who take on leadership roles are called bossy and boys aren't. Something gendery and what not that results in too few female leaders. She may have a point, but banning a word is hardly going to change how female leaders of any age are perceived.

I had mostly ignored the whole discussion as small potatoes and the voice of someone who had 'made it' wanting to tell the rest of us what making it really looks like. That is, I had ignored it until yesterday - until a memory flashed through my mind - not from my childhood, but from just a few years ago.

I was at a family get-together with extended family I don't see that often. I have no idea what we were talking about, but a cousin jokingly said "there's that bossy Shan we all know" or something to that effect. Since I've never been particularly close to that cousin, I let it slide. I told myself "he doesn't know me," "people who know me wouldn't say that," "I was not a bossy child" etc.

Only clearly it didn't really slide, since it has come right back to me. Not the exact words used, but the embarrassment and shame of the moment - the great laughs everyone else had, and the fake smile I plastered on to hide my hurt bewilderment. I hesitate now, when I want to comment on that cousin's Facebook profile. I take a beat and ask myself - will this be taken wrong?

It's the same bewilderment I've felt when I've been told I'm intimidating. I'm tall, and fluctuate between big boned and fat, so generally when I hear that I'm intimidating I assume people mean because of my physicality. But there's some other thing - a quality of sureness in my speech or a facility with language or an expression on my face - that in some way conveys something to people that I probably don't intend and that I'm not even aware of. I was surprised the first time or ten that I was told I'm intimidating, and then I started just shrugging and walking away. 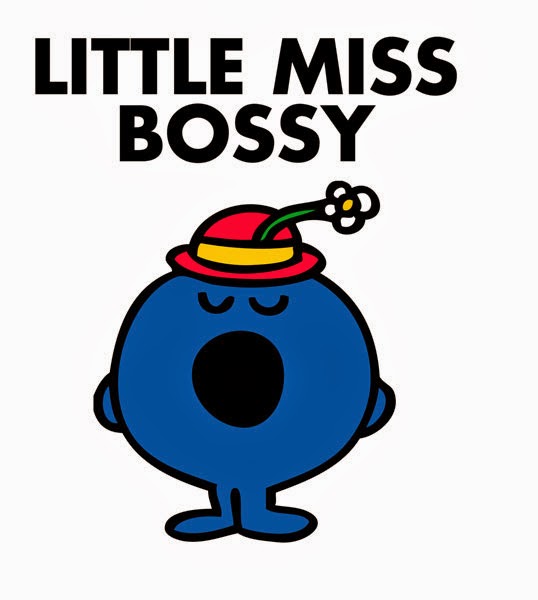 I find the labels both baffling and something to be avoided - strenuously, but unconsciously. I can't be quite sure what they are a response to, and so I generalise about behaviours that might be the cause all without even knowing I'm doing it. I wasn't even aware the avoiding was happening until I withheld information from my book club ladies this week. Actually, I've known for a long time that I hold back & play dumb, but not that withholding is also a part of that pattern, or what triggers it. It's always a nice feeling to unravel a hidden pattern, though, so I did a little exporing:

Anybody who knows me knows I love lists and spreadsheets and organizing information, and so I have somehow fallen, for now, into being the defacto secretary of our book club. It's not an official role, it is just something that developed when I said I'd start compiling the book suggestions each person sent in. And then because I had the list I became the person to randomly generate the book suggestion each month. And then because I have family connections I made the arrangements for our book club retreat accommodations.

It started to add up. It started to feel like I needed to sit down and shut up. It started to remind me of the parts of me I need to try to silence - what I call "the too-much-ness." With my book club ladies I never meant to 'lean in,' let alone push in, but I felt like that's what I've done. Book club is a place, mostly, where I don't have to try - I can just be. And yet when I found used copies of this month's less common book, I kept my mouth shut. I didn't want to once again be the smarty-pants know it all who acts as though no one else can do anything without my input. Every member of the club is capable of finding a book in her price range. My 'help' is not needed. Sit down and shut up, Shannon. Give someone else a turn.

As I left the bookstore and walked down the sidewalk, I started trying to unpack the decision I had made - I tried to understand why I would think withholding information was better than being open with it. And the answer was vibrantly clear - nobody likes a Little Miss Bossy, or her alter-ego Little Miss Know-it-All.

It makes me wonder - what would life be like if I didn't have to spend energy shushing myself? What if I didn't care if people thought I was a know-it-all? What if the label 'intimidating' was all about the speaker's lack of confidence and not about my being 'too big for my britches' (let's face it, I have some pretty big britches).

I don't remember ever being called bossy as a child. But apparently it, and related words - pushy, intimidating, nag - stick with you no matter how old you are when you start hearing them. Maybe that Sheryl Sandberg is on to something. Word banning isn't the solution, but I'll be sure to let you know when I figure out what is. ;-)

Email ThisBlogThis!Share to TwitterShare to FacebookShare to Pinterest
Labels: Growing